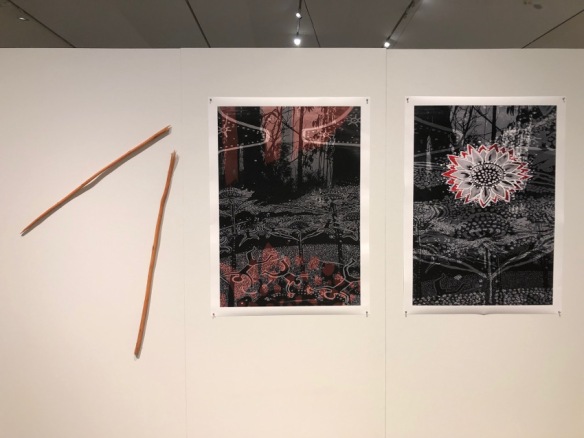 Making an artwork that comments on the involvement of Aboriginal people in Australia’s war effort is contentious. This area of inquiry has for a long time been a very problematic one for me.

In pursuing this line of thinking I found myself coming back again and again to one of the important cultural stories from my people that speak of the senselessness of killing and the far reaching impact to everything around us when we allow our conflicts to spill out into violence.

In Aboriginal culture we are taught that the country holds our stories, Rivers of Blood is a story that narrates an indigenous perspective about the tragedy and loss that bitter fighting brings to us. It is one of the stories of the creation of the Waratah and has key elements of sacrifice and the good that can come through even great tragedy. This story continues to be relevant today and speaks volumes of the resilience of culture, country and community.

There was once a great fight down by the river when many mobs fought and so much blood was spilt that the river ran red with the blood.

Many of the brother and sister creatures were unable to drink from the creeks and waterholes as they too were filled with blood and a number of the birds and animals left us, having to move away to look for cleaner water.

The stories tell of the Sky Father Biami arriving shortly after the killings. They say he was so upset and moved by the senseless slaughter among his people that he wept. And where His tears landed in the blood of the slain warriors it was transformed to become the first waratah.

The waratah reminds us that even after such tragic events something beautiful can come.

Chris Tobin is a Darug man from Western Sydney who presently lives in the Blue Mountains. He works as an Aboriginal cultural presenter, artist and public speaker offering an insight into local Aboriginal history and heritage to all ages that wish to learn.

Chris has served on a number of advisory boards, councils and committees over the years and was one of seven elected Darug representatives to meet with the State government in 2006 to try and work out an ILUA (Indigenous Land Use Agreement) as part of the Native Title process.

In 2017 Chris helped establish the Aboriginal room at the historic Woodford Academy and has made himself available to be there for people at the Academy’s’ monthly open days. He also hosts an art camp in the bush at Bell in the upper Blue Mountains each Saturday for people who wish to connect better with the country and learn more about local Aboriginal issues.

© Resilience in Times of Adversity, 2019